For the Kansas Golf Association, Bob Reid was chosen as a director from Brookridge Country Club in Overland Park, KS in 1967, then that was the only Kansas City area director. He became President of the Board and served from 1978-1980. During his term of service, he was able to encourage the Board to bring in Directors from five of the Kansas City private clubs, leading to access to those clubs for tournaments presented by the KGA. Bob also served as Rules Chairman for the Kansas Open from 1972-1985, and for the Big Eight Conference Golf Championship for the same years. He was responsible for expanding the Minimax handicap service statewide for the KGA.

For the Kansas City Golf Association, Bob Reid became a Representative in 1965 from Brookridge, the club he had joined after moving here in 1960, and became director in 1967; he was elected President in 1975-1978 and served as Executive Director from 1983-1997. He successfully encouraged the Board to add Public Links and women members to the Board. During his tenure, he saw the addition of three women’s tournaments to the KCGA program (a Mid-Am team event, a Match Play Championship, and the Tournament of Champions for women club champs). He brought about an increase in club membership from 29 to 51 and raised the number of golfers on the handicap service to 18000.

Concurrent with his involvement with the three golf associations, Bob Reid provided exemplary service to the United States Golf Association from 1970-1999. He was a member of the overall USGA Committee, as well as a member of the smaller Regional Associations Committee from 1983-1997. Having attended 11 USGA-PGA Rules seminars and taught other rules officials, he has long been recognized as one of the foremost authorities in this area. Bob has worked over 20 USGA majors (Opens, Senior Opens, and Amateurs) plus the 1982 Walker Cup Matches at Muirfield Golf Club in Scotland. And that is just the big ones. Always obliging when his assistance is requested, Bob did rules work for the PGA Senior Tour in Kansas City, as well as the former Hogan Tour, the Midwest (mini) Tour, and the Prairie (mini) Tour. Others have recognized and appreciated Bob’s contributions. Mark Passey, Regional Manager for the USGA’s South Central Region, paid tribute to Bob in 1999 with these words: “You have made the game of golf vastly better in your region. You have had a profound effect on the KGA, MGA, and KCGA. You have given of yourself graciously, tirelessly, and generously. I know of no one with a bigger heart or more generous spirit. You have touched the lives of juniors, seniors, amateurs, pros, men, women, players, volunteers, USGA officials, club officials, and made us all better…”

Robert Carter Reid was born in St. Louis, MO, on April 26, 1920. He graduated from St. Louis Country Day School in 1938, ironically having not lettered in golf. He had taken up the game at a public course when in high school and believed it was played with wooden tees not only from the teeing area but from the fairways too. The school’s golf coach had heard that Bob played the game, but was utterly dismayed to discover his method; Bob’s phone did not ring. He attended Washington University in St. Louis, leaving to enter the Army Air Corps as an Aviation Cadet in 1941. He won his wings as a Second Lieutenant in 1942, and became an instructor of Cadets and then pilots of B-24 and B-29 heavy bombers until the war ended.

He joined TWA as a co-pilot in February 1946, and after being based in Detroit for four years and Los Angeles for six years, he came to Kansas City. He married Jan Brown in 1954. They had two children, Shirley and Robert Carter II, and have four grandchildren, the family of Shirley and son-in-law Glen Posladek.

After succeeding Loren Laberth as Executive Director of the Kansas City Golf Association, Bob set up the offices in the Reid basement on Ensley Lane, not a spacious area. Soon, Nancy Sedorcak came on as Bob’s assistant director. Jan Reid’s mother was also a resident of the home as were Walter, the Siamese cat, and three dogs named Jack, Taylor, and Happy. Loudly and vigorously greeting visitors, the otherwise loveable dogs barked up a racket that routinely shattered any hope of peace and quiet.

At the heart of golf, association operations are the Rules specialist, and that is where Bob shines. One major decision that tested his courage occurred when he was working the USGA’s Senior Open at Ridgewood Country Club in Ridgewood, N.J. in 1990. During the third round, Jack Nicklaus and Lee Trevino were paired in the final group and arrived at Bob’s assigned hole, a par 5. Bob was near the green when Nicklaus hit his drive into the right tough to an embedded lie. Reid was without wheels and had to walk about 300 yards to the spot. The huge crowd parted to allow him to get through to look at the situation, just as he saw Nicklaus leaning over on tiptoes, stretching away from the point of the ball’s landing place. Addressing Bob, Trevino announces that ‘everything is already taken care of… we’ve handled it.’

Calmly, Bob said to Mr. Nicklaus, “I’m sorry, but that is not the correct drop.” And he asked Jack to re-drop correctly. And Jack re-dropped. Bob was satisfied and went back to the green area. Postscript: Lee Trevino won the championship and Bob had finished another good day at the office. Bob was a member of two clubs, Meadowbrook and Milburn. Mr. Reid passed away at age 95 on December 15, 2015. This one-of-a-kind gentleman has been a blessing to golf.

(Appreciation to Ken Krakauer for this contribution.) 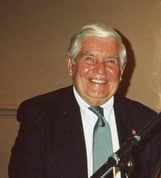