Coach, Contributor to the Game

When Rusty Hilst checked a book on golf out of the library when he was 14-years old, he never imagined his association with the game he grew to love would be recognized and honored. From the time Hilst first purchased a used set of clubs, it was obvious he had been bitten by the “golf bug.”

Hilst is well known as Hutchinson’s ambassador of golf throughout a 45-year association with the game. His accomplishments came first as a player, secondly as a high school coach, and finally as a contributor to the game at Prairie Dunes Country Club and in a 26-year association with the Kansas Golf Association. His ability to work with youngsters and administrators in every facet of the game gave Hilst a wide range of experience that worked perfectly with his friendly demeanor and dry wit. The 59-year-old Hilst started playing golf at the age of 14 and was tutored by longtime Carey Park Golf Course professional Harold Hoffman. Hilst believes Hoffman’s positive encouragement led him down the path he chose.

His first major accomplishment came as a player when he sank the winning putt that clinched the 1960 high school state title for Hutchinson High. Hilst later captured seven Prairie Dunes club championships and five Hutchinson City match-play championships. He holds the unofficial course record at Carey Park Golf Course with a 60. One of his true loves came from coaching Hutchinson High’s golf team for 31 years from 1971 to 2001. Hutchinson captured high school state titles in 1974 and 1995 and counted 13 top-three finishes during that span. Hutchinson’s varsity players were properly prepared for competition mentally and physically by Hilst. But Hilst spent time with every player, realizing there are lifelong lessons to be learned from golf.No better example was provided by Hilst himself. When he determined that a scoring error had been made by one of his players at a state tournament, the subsequent disqualification cost Hutchinson High a state championship. The integrity of the game was upheld. His contribution to the game expanded another notch when was accepted as a member at the nationally-respected Prairie Dunes Country Club, where he is still currently a longtime member. Hilst has contributed behind the scenes or in the forefront of virtually every collegiate, state, and national championship contested at Prairie Dunes. Hilst was a co-chair of the scoring services committee of the 2002 U.S. Women’s Open. The committee was responsible for scoring, greens reporters, communications, leaderboards, NBC spotters, standard-bearers, walking scorers, and scorecard copying. He has been a fixture in various capacities for the Kansas Golf Association since 1976. He has composed scoreboards and scorecards. He has marked the course and located pin placements in a fair and even-handed manner. He has answered rules questions. His honest and calm approach with youngsters employed the diplomacy of a politician. He has worked with three Kansas Golf Association executive directors and also engaged with a host of USGA and other national events across the country. Hilst considered his knowledge of the game, its traditions, and rules to be a constant learning experience. For those contributions in varying capacities, Russell “Rusty” Hilst is duly honored as a member of the Kansas Golf Hall of Fame. 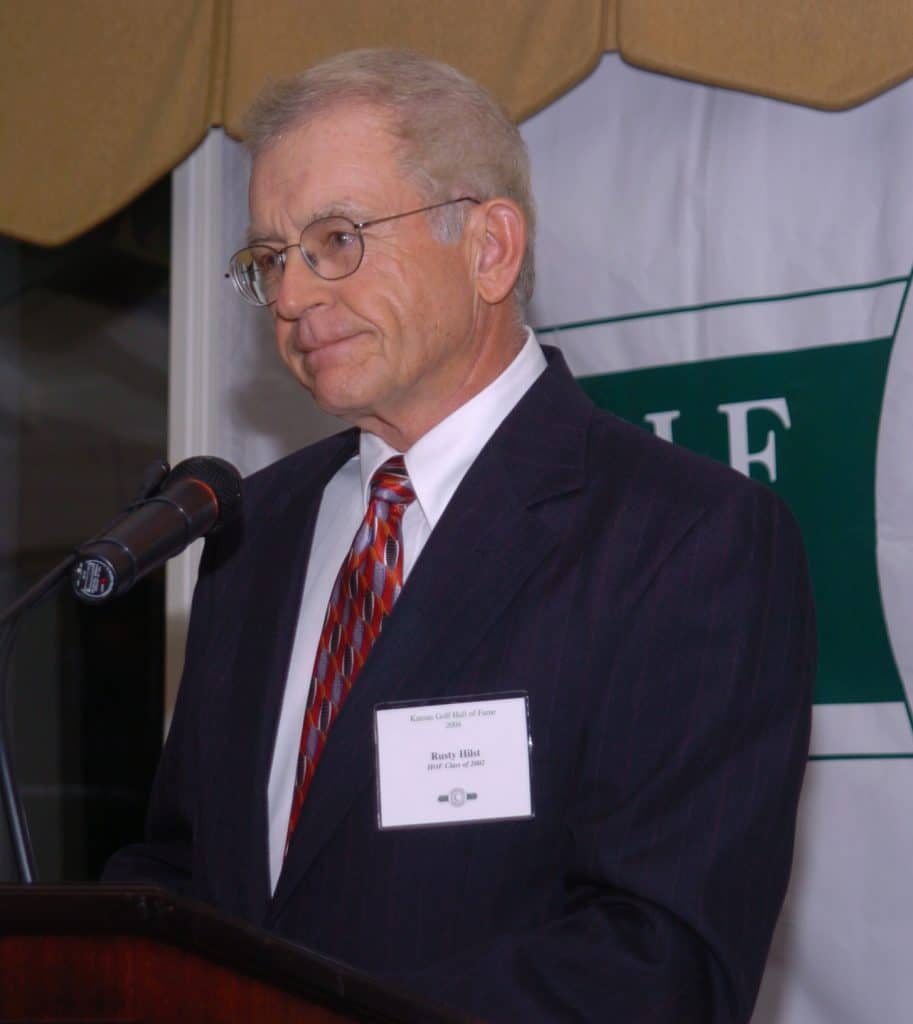