Long-hitting Johnny Stevens, a former PGA Tourist, has won titles in three different states and claimed the intersectional Trans-Mississippi crown in a career that has spanned five decades.

He might still be winning championships except for a lower back problem that kept him off the golf course for more than a year.

Stevens is the most accomplished amateur golfer the state has ever produced. He is the only golfer ever to win the KGA’s trifecta – the Junior, the Amateur, and the Senior.

He has won five Kansas state titles and five Wichita city championships. He also won the Missouri Valley Conference individual title in 1964 playing for Wichita State University. Four years later, Stevens tried his hand at the PGA Tour. He played in 1968 and 1969 and earned top10 finishes in the Buick and Canadian Opens. He was also ranked among the longest drivers on the Tour in 1968.

From tee to green, Stevens’ numbers were as good as any player on Tour. His putting stroke kept him from becoming a consistent big winner. As he approached senior status, he tried every putting method known to man, sometimes carrying three different putters in his bag. Stevens regained his amateur status and established a business and quickly began winning again. He won the Wichita stroke-play title in 1982, then teamed up with Nick Onofrio of Wichita to begin the long-running “Slim-and-Arnie” show. The lanky Stevens was known as a “Slim” and he called Onofrio “Arnie” for his mannerisms on the course, which resembled the great Arnold Palmer. Slim and Arnie captured four Wichita city fourball titles and the 1986 Trans-Mississippi fourball crown. When Stevens turned 50, he immediately won the 1993 Kansas Senior Amateur and in 1994 was the low amateur in the USGA Senior Open. That earned him back-to-back KGA Senior Golfer of the Year honors.

He capped it all off with a victory in the 1997 Trans-Miss. Not the senior. He beat everybody over 25 years old.

Stevens comes from a golfing family. It all started with Uncle Willie Lewis, the brother of Johnny’s mother, Annie. Uncle Willie taught Annie the game, he then taught her husband Nick, a former Wichita State football player. Annie won a Wichita city title and two state senior crowns and Nick won one city and one state senior championship. Every member of the family got lessons from Uncle Willie, a pro at Wichita Country Club and later a pro at Patty Jewett public golf course in Colorado Springs, Palm Rivers Country Club in Naples, Fla., and Bay Hills in Orlando, Fla. Johnny’s brother Jack won a state tournament and two city events and daughter Cathy won a record seven city titles, four states and one Big Eight Conference crown playing for Oklahoma University. She also coached the Wichita State golf team. And Johnny’s son Charlie won a state junior and was a medallist in the Kansas Amateur twice. The family owns 16 state championships. No other Kansas family comes close to that number. It could be a national record but there is no clearinghouse for that type of information.

Johnny was also heavily involved in real estate and golf course development. He joined George Ablah in developing Willowbend Golf Club in 1987 and at one time was a partner in Hidden Lakes, a public course near Derby. Johnny Stevens has long been a driving force in Kansas golf, as a player and a golf course developer. Before his back problems, he always made time to participate in local and state events. He has begun playing again but has not been able to work hard at his game. If his health improves, he could once again begin to add to his impressive list of championships or at least make the winners work harder for their victories.

(Appreciation to Mal Elliott for this contribution) 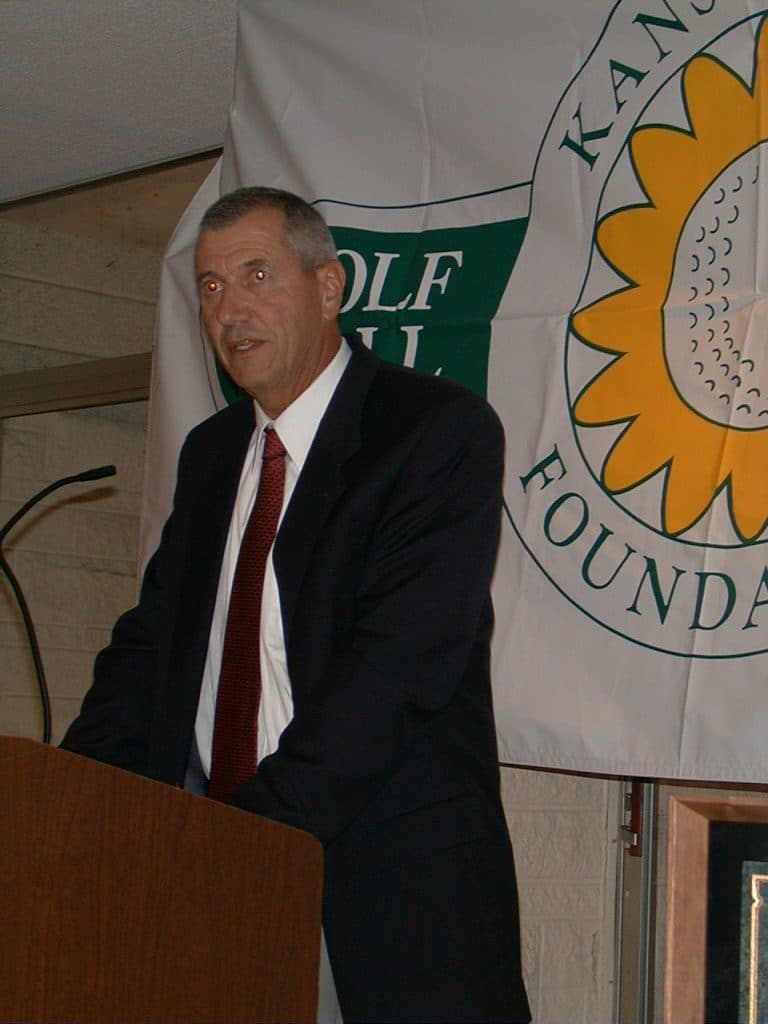